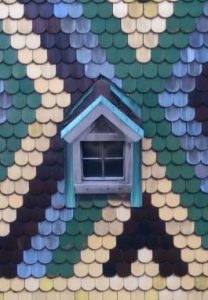 A linear economy is a straight line where that discarded is forgotten, an economy where consumerism is a requirement.  Products (often including buildings) are produced with a built-in obsolescence and/or an absence of durability that require them to replaced.  We are familiar with the requirement to repurpose old buildings, which when new suited the now outdated use for which they were designed.  Fitted kitchens are too often replaced, for fashion reasons or due to their durability failing.  The consequence of a linear economy is this, where an appearance of constant improvement allows us to discard the old to be replaced by a new that is often of a lesser quality.  I remember a café in the centre of Dublin that in the late 1990s had the high quality 1950s interior removed violently, thrown into a skip and discarded, only for it to be replaced with a more contemporary interior.  The old style was even then becoming fashionable again and was of such high quality that it could easily of lasted another 50 years.  The newer interior was again replaced due to poor quality and failing business.  It has never recovered from its’ previous glory.  David Moran Architects were neither involved in the disposal nor in the subsequent ‘renovation’.

A circular economy seeks not to repurpose nor to replace.  A circular economy seeks to maintain by constructing or producing high quality items that can be maintained.  This is how the above café had originally been fitted out.  There is a long tradition in the building industry of salvaging and re-use.  The cheap availability of new low-quality fittings and furniture has made it difficult to find economical salvaged replacements.  Salvage businesses are now more quality focussed which results in the preservation and saving of mostly the higher quality goods, these generate a better income and are therefore a better investment.  Low quality in in production generates waste and does not demonstrate a good investment.  The lower quality (still often of higher quality than the cheap new replacements) salvage are often discarded or destroyed.  Sometimes repurposed by the eclectic minority.

It is easy to discuss the portable and apparent temporary fittings in relation to a circular process.  More challenging is the repurposing of older buildings.  I recall as a child while on holidays in rural Ireland, the local farming family from whom we were renting a house had only just moved into a newly constructed bungalow. (Designs taken from the book ‘Bungalow Bliss’ 1971). The impression as a ten-year-old was that the older then abandoned house exuded character and craftsmanship while the new lacked both.  While staying in one such bungalow, also in the 1970s, I remember the window falling out, not the glass, the entire frame and encouraged only by my opening it.  There is a high stock of derelict houses and while many are in poor condition and some not well built to start, technology today offers a wonderful opportunity to repurpose these as homes and to a higher standard than many of rural Irelands bungalows of the 1970s, 1980s and 1990s.  Stone houses, used as outbuilding, or hidden in overgrowth lie throughout the country.  The circular process is all encompassing and to exclude any sustainable opportunity is contrary to the principal.  How to make this consistent with a modern economy is a challenge as much of modern linear economy relies on waste.  The trades and skill required to change a derelict building into a modern sustainable home exists.  It exists in both modern technology and traditional methods.  The constant expansion of cities and towns with little regard for these historic buildings is a linear approach.  Change the old discarded into meeting places, playgrounds for the young and into homes!

Included amongst the dereliction are many modern bungalows which have not aged well and have proven unsustainable.  A consequence of the impression that a simple book design is sufficient for the construction of a home.  The image was there but the substance or craftsmanship and quality was not, this was not the fault of that book.  The pattern of houses throughout the country changed in the 1970s, where older houses were orientated specific to their sites, the sun, wind, shade of hills and the view.  The newer orientated to the roads more than even the view and assumed that the new could perform better than the old.  These houses over time have often not performed well at all.  This is not the fault of the book.  This is the fault of consumerism and a mistaken assumption that new is always better.  It is also the fault of the absence of skill and quality.  The book had provided a service where people could build a house cheaply without the need for professional and included guidance on how to build, reducing the need for craftspeople.  The error was that the consumer believed that the book was sufficient of itself to relegate expertise and skill to a distant place.  Relegation of this kind reduced the requirement for skill, experience and professionalism and made the provision of these services less profitable. The consequent reduction in skill is a loss to society, though thankfully it remains and appears to be more sought after.

The ultimate symbol of linear is the disposable plastic bottle.  The disposable/recyclable plastic bottle is also the symbol of the recycle economy, an attempt to make the linear acceptable.  Cheap disposable plastic bottles do not exist in a circular economy, glass bottles are at times reused for up to 20 years before being recycled.  A circular process is nothing new or innovative, nor is it unusual today.  Circular processes are common in the developing world and have been in Ireland until very recently.  The cheap availability of products has us take less care and this combined with a perception that products are generally of poor quality has many of us replace rather than repair.

Clarifying the illusion that business requires a linear approach is key to our evolving society.  It is possible to reduce production with sustaining by the creation of products that are maintainable or reusable.  Cleaning glass bottles rather than producing cheap disposable plastic is an obvious example.  Producing high quality windows with backup maintenance will reduce disposal and replacement.  The backup components include draft seals, opening mechanisms and trim, all of which can wear due to use and accidental damage.  This is often the case with many existing windows.  Replacement windows are marketed far more than repair providers.  Often the smaller companies offering repair lack the marketing budget of the larger window supply companies.  While new windows generally offer higher performance, replacement generates more waste, has a higher carbon footprint and a higher cost.  Replacing windows therefore should be undertaken using only the best quality. This ensures that the finished product out-performs even the repaired windows being replaced and to an extent counteracts the carbon footprint of the new.  The removed windows may also be re-used where performance is less a concern, for instance in a garden room or garage.  High quality new windows should also be chosen based on maintenance and repair support from the supply company.  A supply company that does not provide sustainable support following installation are expressing themselves as a linear company.  This support should be noted as part of the supply package and may be direct or through approved service providers.  This generates employment and opportunities for business to replace the apparent loss of manufacturing jobs. It also provides the opportunity for more community-based service provision.

Furthermore, window replacement using significantly improved performance products has the most benefit when combined with other improvements.  Adding insulation and installing windows in the correct location will provide a solution to a higher performance standard.  The complexity of modern buildings requires expertise at every stage.  Foe health reasons buildings require skill and experience from suitability trained professionals and tradespeople.  The costs and attentions required to construct modern buildings is such that to seek a less sustainable option is no less likely to be wasteful today than in the past.  In fact, disregarding a wider sustainable circular big picture model has proven in recent times to be even less sustainable than the blight of building in earlier times.  Ghost estates now litter the country despite a housing shortage, located often in areas where there is no demand, no supporting structure and little employment.

The remaining and only question is whether our children and grandchildren can afford for us to remain linear.  Should we or must we change? 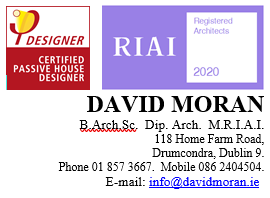 View all posts by: David_Moran_Architect